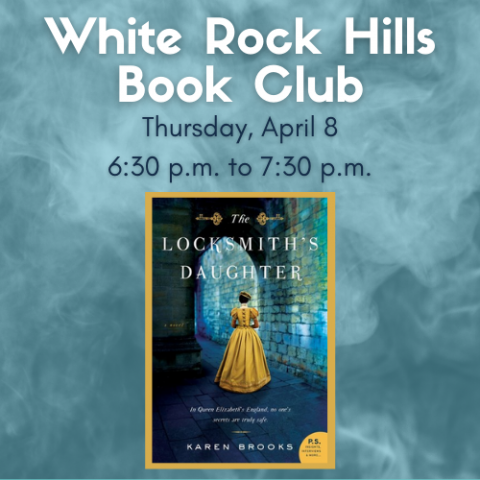 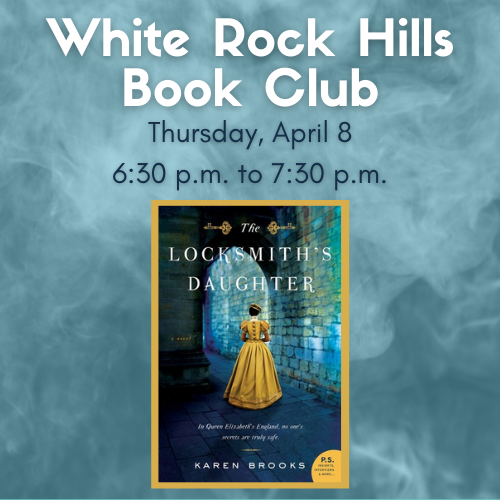 The White Rock Hills Book Club meets monthly on the second Thursday of the month.

This month's book is The Locksmith's Daughter by Karen Brooks.

In Queen Elizabeth's England, where no one can be trusted and secrets are currency, one woman stands without fear.

Mallory Bright is the only daughter of London's most ingenious locksmith. She has apprenticed with her father since childhood, and there is no lock too elaborate for her to crack. After scandal destroys her reputation, Mallory has returned to her father's home and lives almost as a recluse, ignoring the whispers and gossip of their neighbors. But Sir Francis Walsingham, Queen Elizabeth's spymaster and a frequent client of Mallory's father, draws her into his world of danger and deception. For the locksmith's daughter is not only good at cracking locks, she also has a talent for codes, spycraft, and intrigue. With Mallory by Sir Francis’s side, no scheme in England or abroad is safe from discovery.

But Mallory's loyalty wavers when she witnesses the brutal and bloody public execution of three Jesuit priests and realizes the human cost of her espionage. And later, when she discovers the identity of a Catholic spy and a conspiracy that threatens the kingdom, she is forced to choose between her country and her heart.

Books for our upcoming meetings include:

- May 13: Book Woman of Troublesome Creek by Kim Michele Richardson